Keeping the farm up and running often means keeping the delivery cars up and running as well.  It has been a rough month of wear and tear on both me and the cars.  Lots of go go go with all of the pumpkin outreach.  So something was bound to fail, and two things did.  First, my rear drum on the hub worked it’s way loose, creating an annoying squeak squeak squeak sound that could have led to an expensive replacement if it continued long enough to destroy the splines on the axle.  That is all repaired now, so the next thing was the muffler clamp rusted out completely. In doing so, the muffler pipe came out and created an exciting, though annoying to others, muffler sound.

So first, let’s jack the car.  What to know:   Safety!!!! Don’t even start without a floor jack, two jack stands and safety goggles.

Know the rating of the equipment and of the vehicle you are jacking.  This floor jack is rated to 4000lbs, and the stands to two tons.  The car weighs less than two tons…that is the key.  Vehicle must weigh less than the numbers on your jack equipment.  Don’t know the weight of your vehicle?  Look up the year and model online, or in the manual, or in my case, inside of the door.   For this simple muffler repair, three tires are on the ground, with a wooden block on front and back of one of the wheels that is touching the ground. Next, after jacking off the solid frame, the jack stands are placed at two other nearby locations on the car as a back up.  This will seem way over the top for many, as the car is barely “up” off the ground, but it is better safe than sorry.  Next, safety goggles on…and off the top of your head.  Then once the car is jacked and secured, hit the old rusted muffler clamp with a mallet a few times to loosen, then apply penetrating liquid of your choice.  Let it sit a bit, then take two wrenches that are the same size, one top, one bottom and “break” the rusted hold of the bolt. The top wrench will hold the top of the bolt in place, while the bottom wrench will be put on the bottom of the bolt and you will push the wrench clockwise, while the upper wrench is pushed in a counter clockwise position.  This is breaking free the bolt so that they can be removed from the muffler pipe.  Mine came apart in a pile of rusted bits.  Without the safety glasses, this could have gotten in my eyes.  Make sure you have the new clamp of the right size first.

A small repair, but it keeps the car on the road, and deliveries right on schedule…without waking the neighborhood!  Here is a mini video to go through some of the above.  Good luck, and never go under a car without multiple safety points jacked and secured!

as always, my video cuts out (LOL) but you get the idea.

A closer look at the replacement clamp.  Note the two circular parts that need to be put around the smaller pipe prior to clamping the lot together.  The top of the clamp is at left.  It is considered the top, only because that makes it easier to screw on the nuts from the bottom.  Here is how it would look like as you are piecing it together…

and this is with the two circular pieces, and the two part clamp cinched down over where one pipe was inserted into the other.  You could use three hands, but by assembling one side of the clamp prior to pushing the pipes together, it makes it much easier.  Then two wrenches again, one holding the bolt from spinning at top, then the other wrench tightens the bottom nut.  I went back and forth and tightened each one so to tighten evenly.  Then the real test…start the engine and listen for what the muffler sounds like… then joy ride to follow!  Yes you can do this one….Good luck aspiring gear heads!

the pursuit of pumpkin 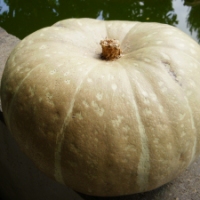